When I asked my sister for fabric for Christmas, I really didn’t know to expect. I wanted to try some different patterns and create some easy projects. She gave me two jelly rolls. After opening this one, and seeing how perfect it matched my kitchen, I scoured the internet for a table runner.  I decided on a a variation of a french braid.

Most french braids have pointed ends, and have a diamond in the middle. Here’s a tutorial from Jenny Doan at the Missouri Quilt Company if you want to follow that idea. I wanted a rectangle. And, because I only had jelly rolls, it would be difficult for me to make the large diamond in the middle. I made my own version.

I started sewing pieces together, using the light 2 inch square in the center. If I had followed the tutorial, I probably would have been more efficient with my fabric. As you can see, I ended up with longer and longer pieces. I started using shorter pieces to preserve fabric, but then I was concerned the table runner wouldn’t be wide enough.

Once I measured my table, and a table runner I already had, I settled on my width and length and squared it up. I used the leftovers to make a simple backing, and pieced together enough light pieces to make the binding, which I machine sewed.

On to the quilting. I had taken Crafty’s Creative Quilting with Your Walking Foot (This class is my all time favorite so far – Jacquie Gering is an excellent teacher.) One of the more fancy stitches she recommends is the serpentine stitch. At first I thought I would do it both ways, crossing at the middle. But after finishing this table runner, I had enough. Straight line quilting is a bit tedious. And, even though she makes it look easy, believe me, it is not.

While I can see all the mistakes -the stitches are uneven, and a bit wobbly, – I think the overall look of the table runner is very consistent. And I love the contrast between the thread and the fabric.

This table runner is proudly displayed on my kitchen table. How do you like it?

Next I’ll share what I did with the leftover scraps.

Your comments are welcome! Cancel reply 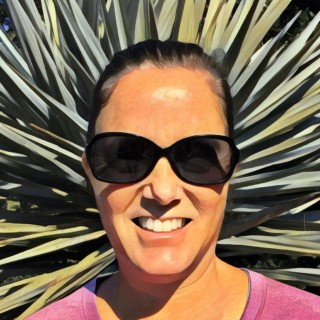 When I'm not working, I'm either cooking, sewing, or spending time with my family.